A day out to the end of the District line and the relatively new Tramlink. This was a day of discovery to explore the Tramlink and its immediate surrounds at the home of British Tennis. Thankfully, the tennis Open had finished at the All England Tennis and Croquet Club, but then again I wouldn’t have travelled here when it was on. For those who know the area, or who have visited the tennis, you’ll know that it’s a good half hour walk away from the main centre. Be that as it may, the centre still had on show the remnants of the mega advertising/promotion that accompanies tennis championship with larger than life hoardings for Lavaza and Polo still on display.

The station at Wimbledon is relatively busy serving as a gateway to the south of England but it’s very commutable to central London too, via the main line services and the District Line. 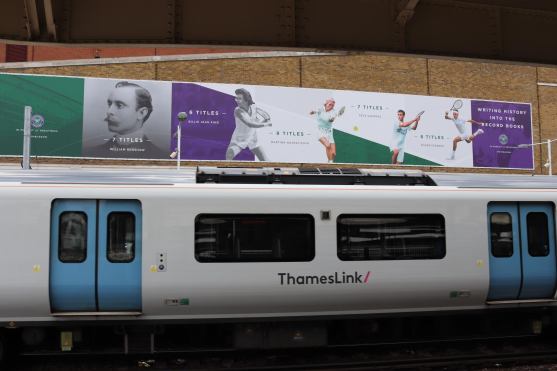 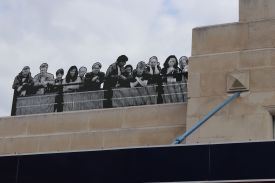 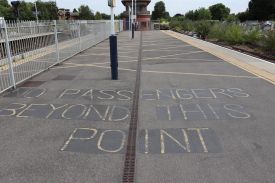 My particular interest today was the Tramlink, so I decided to hop on and enjoy the ride and help visualise the route in preparation for its three other ‘end of the line’ destinations. The trams and track features are similar to those found on the Manchester Metrolink, a service I’d used frequently when working out of Salford Quays in that the track shares road space and in places re-uses redundant rail lines. In researching this blog, I’m surprised to learn that the Tramlink began operating in 2000, so by comparison to the rest of the Tfl network, still relatively new, serving the southern region of Greater London through Mitcham, Croydon, Beckenham and New Addington.

Today I go as far as East Croydon before doubling back to Wimbledon and take in the country scenery as we ride through Morden Hall Park and Mitcham Common before hitting the metropolis of Croydon. As with all Tfl lines, there is a distinct colour scheme enshrined in the Tfl Colour Standards, which looks like lime green, but for the ‘aficionados’ it is PMS 368, C57 M0 Y100 K0, R0 G189 B25, or NCS S 0580-G30Y 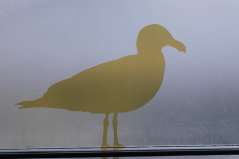 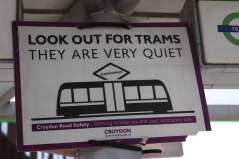 Back to Wimbledon, and a casual stroll around the town as I’ll explore in more detail on my return trip. However I’m attracted to the library turning right out of the station which is an architecturally blended mix of historic victoriana and 60’s build. As with most libraries these days, it’s a multi-purpose building in full use providing free access to all media forms: be it books, magazines or internet; an events space and an area for children’s activities. Outside, on the north west wall, is an interesting sculpture by Mohammed Sheibani entitled ‘Release’: a composition of three murals depicting books on bookshelves made out of bricks or terracotta tiles – take a look if you’re passing by as it’s easy to miss. Turn around and you’ll see a stylish red brick building proudly emblazoned with ‘Bank Buildings’ but now alas like a lot of bank buildings, converted into fashionable cafes and restaurants – this one is an ‘All Bar One’ 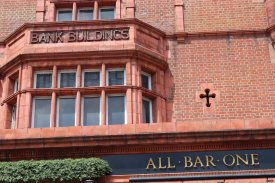 Turning back into Wimbledon, I decide to turn my attention on interesting signs; well signs that I find interesting, for no other reason other than I find the shape, colour, pattern or message stimulating. The ones captured here are:

Journey’s end is defined by a display of local festival posters, and the imposing spectacle of the Prince of Wales hotel which proudly promotes the imbibing of Brandies, Liqueurs and Wines.

I look forward to my return trip to explore in more detail the local treasures.

For more info, look up Wimbledon on Wikipedia

A somewhat uninspiring 😉 visit to High Barnet last week...
Guess the name of the pub....no no I mean guess where this pub is 🤭
Final set of pics from Aldgate. Blog. Comming soon...
Aldgate station from a different angle...
Some more from around Aldgate...
A day out in Aldgate. Too many interesting pics so will post more soon...and I'll be visiting the area again as it's so rich in history...