Cockfosters is where London becomes suburbia and trips into the countryside along the A111 out of Palmer’s Green en route to Potters Bar. I’d passed through Cockfosters before, by accident, on a mission to pick up my daughter who was destined for Hadley Wood, but owing to various delays she changed route. The two stations aren’t too far from each other, so an easy detour to make. Today was a chance to have a good look around.

The station is typical of the iconic architectural style of the early 1930’s; a style that oozes art deco and modernists tastes, and a style that adorns many a tube station owing to the underground’s expansion between the wars as London grew and stretched its boundaries. 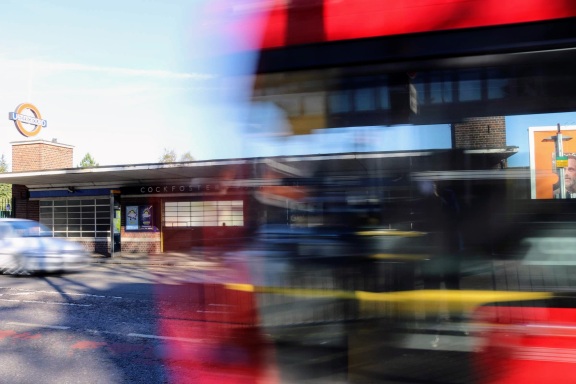 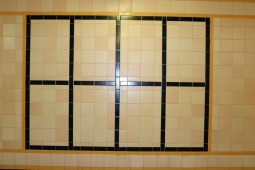 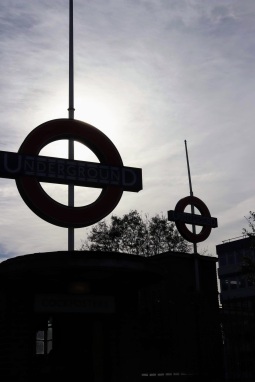 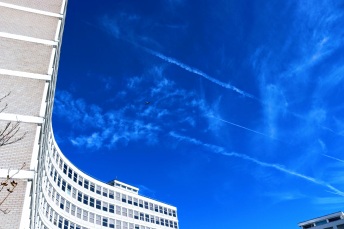 Cockfosters sits within the London Borough of Enfield, and it is predominantly characterised by a sprawling parade of shops, a common London sight, full of independent shops on the ground floor of low rise arcade style flats. An affluent and clean area with off road parking for shoppers, and some high rise office blocks near the station, built no doubt to attract businesses out of London taking advantage of the easy train access. 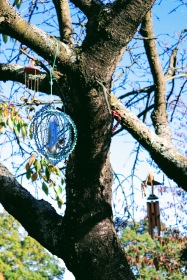 Turning right out of the station, I go into Trent Park Cemetery. Not that I have a morbid fascination, but recent personal circumstances had me in a contemplative and reflective mood. The cemetery presents a curious celebration of life with small isolated markers spread over two fields where memories are placed. No gravestones, and I don’t think they were burial plots either as there was evidence that memories were transient. Some spiritual reminders of those departed can also be seen in the avenue of trees that delineate the fields.

Over the road, I stroll through the graveyard of Christ Church, an evangelical church with a more traditional graveyard and one dominated by a single vault within which were interred the remains of the Bevan family in the late 1800’s and early 1900’s. I suspect they were significant benefactors of the church – a quick search reveals the church was founded by a Robert Cooper Lee Bevan, a founder of Barclays Bank. 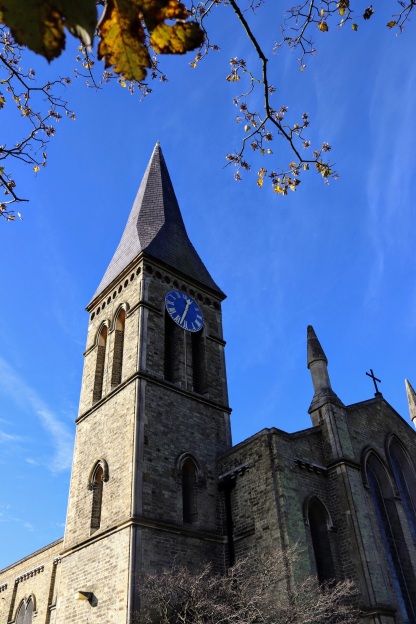 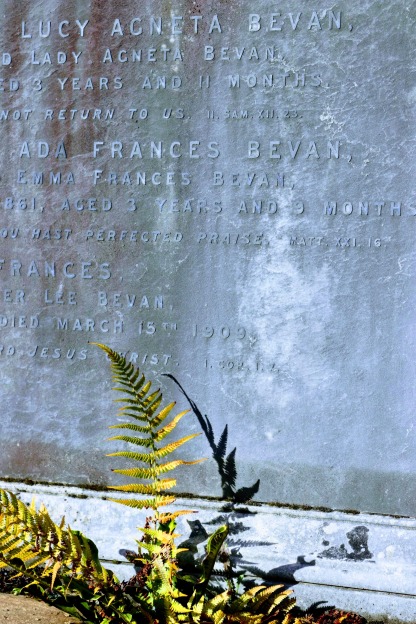 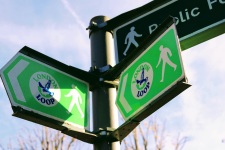 into 24  sections? Neither did I until I stumble across the London LOOP (London Outer Orbital Path) managed by Transport for London as part of their ‘Walk London’ initiative.

And how about the Pymmes Brook Trail? One of London’s many long forgotten water courses which 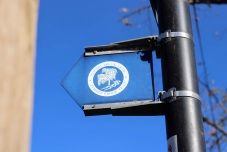 springs up in nearby Hadley and runs through to the river Lee.

I spot both signs by Christ Church; a stone’s throw from the station.

‘Welcome to a small part of Wales’…Ever had that serendipity moment? A slight diversion…that’s a word I first came across whilst watching Dr Who many many years ago and it’s just sort of stayed with me. Anyway, back to the plot…

I glance down Freston Gardens and see a large imposing religious building that is sort of ‘calling me’. One of the many lessons I have learnt from this journey is ‘…to just go see…’ as if I don’t I’ll only regret it later. As I pass the detached houses along the way, there is clear evidence of the post-Halloween apocalyptic mess in gardens and shrubbery in the guise of a dismembered hand and spray cobwebs in different colours.

And as I approach the building, I smile and understand ‘the calling’, as I discover the Welsh Chapel of Eglwys Y Drindod. Why? Well as I was brought up as a Welsh Independent chapel goer – Capel Annibynwyr Seion yn Aberystwyth, the memories of chapel service and Sunday School were somewhat etched and surfaced in that smile.

A striking brickwork designed building, but alas I couldn’t go in , but nevertheless I let the moment and memories linger a while before saying farewell…

By now I’ve decided to stretch my legs as far as Southgate, and approaching the roundabout as Cockfosters Road turns into Chase Side, I spot a road sign for Chickenshed, the all inclusive theatre company. Chickenshed’s success has been well documented through London life in recent years and I was intrigued to look around. From its early beginnings, the theatre company and buildings have grown significantly to that of a multi-purpose, and all inclusive entertainment and learning centre. 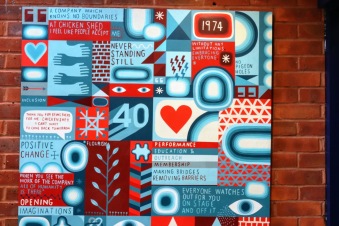 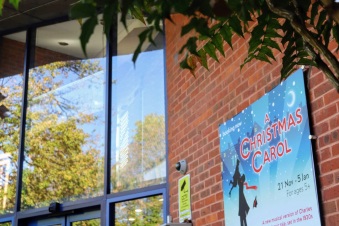 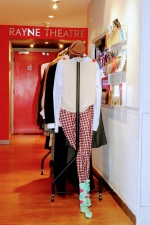 A quick scout inside to check I can take pictures and I chat with several folk. Bill, the Deputy manager explains the theatre is purely self financed as it does not meet the Arts Council’s funding criteria, so there’s a heavy reliance on box office takings, donations and gala evenings. However, despite the constant financial challenges, they continue to expand their portfolio of performances, education and outreach events, and they will soon be performing ‘A Christmas Carol’ over the festive season. I share a moment on how I felt signing added to the value of a theatre production having recently enjoyed how a signer was seamlessly integrated at a local production of Once.

Adjacent in Bramley Sports Ground, is the home of Saracens Amateur Rugby Football Club, and I stroll around inside the park. The club is part of the wider Saracens brand, who now play Premiership rugby at the shared ground with Watford Football Club, but the ground here is nevertheless the historical home of the club. As with all sports, sponsorship is key, and Saracens ARFC is no different, in league with a housing development across the road from their ground.

Here is where I stayed when I first moved to London in 1989. Living in digs along Chase Side before finding a house and moving the family,  and I had some romantic notion I’d be able to find the place. But a combination of faded memories and redevelopment for an Asda superstore meant that the house hadn’t survived. Ah… 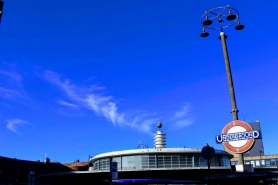 Southgate is similar to Cockfosters, but larger, and its iconic underground station set against an azure blue sky made for a striking moment.

A study in wood

My final route is through Grovelands Park which is

nestled between Southgate and Winchmore Hill, the station there being my journey’s end for the day. The park offers open land, an ornamental lake and a wooded walk alongside a stream, all of which was attractively captured by the low sunlight on a cool autumnal afternoon. I take the opportunity to try my hand at some creative shots, and to my surprise in the wooded area, I come across a menagerie of carved creatures that captured my attention for a little while. 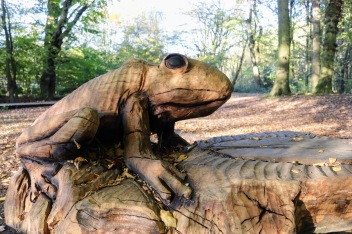 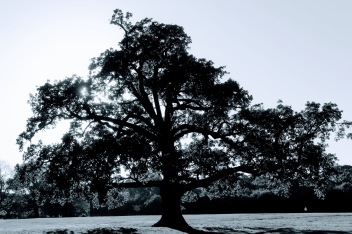 I hope you enjoy my efforts?

See the sidebar for a sample of Cockfosters pics on Instagram

For more info, look up Cockfosters on Wikipedia 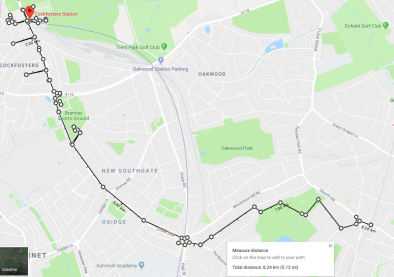 40 years today with this lovely lady. Happy Anniversary Mrs T... Xxxc
Yesterday's day out in Abbey Wood to Tfl's ghost station. Read about it in my next blog...
Battersea Power Station (station?!) - my first of three visits to an 'under construction' end of the line...@batterseapwrstn
Go check out Talking Heads at Battersea Power Station @batterseapwrstn
...and so I've now visited all the ends of the TFL network. But worry not, the travels continue. Watch out for bonus blogs as I visit those new ends of the line that are currently under construction...
Final selection from Reading...